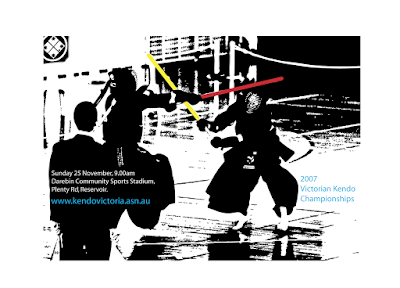 Well the 2007 VKC was a hectic day for some, a lot of waiting around for others! I was one of the hectic ones, hence no pics: sorry! :(

Nanseikan was represented by me, Eli and Jordan. All of us had only so-so showings in the individual comp. But in the team comp we did really well. We fought Fudoshin, one of the strongest clubs in Australia (their five person team had, I think, three national team members on it!). As the rules state, we were allowed to enter as the smallest team of only three people, which meant that we had to win all our matches in order to beat Fudoshin and progress to the next round. We thought that was a pretty tall order, so we had fun with our draw. Often the best kendoka fight in first and last position, with the number three spot going to the next best fighter. I volunteered for first spot, Eli for number three and Jordan for number five.

I fought first, against Alvin Chen who is a very good 3 dan and fights in jodan kamae (shinai above his head). He has been training very hard but I managed to beat him. So far, so good...

So we were one up, but because we had only three people and no-one to fight number two, the next match was automatically awarded to Fudoshin. Two all. Next was Eli, who fought Ben Kelly, 5 dan, national team member, State coach and former state champion. Ben scored the first point, but to everyone's surprise, Eli not only equalised, but soon followed up with the winning point! Two-one Nanseikan!

Next match we again had no one, so Fudoshin again won by default. Two-all.

So we came to the final match of the round and the unthinkable was possible! If Jordan won his match, we would beat Fudoshin and go through to the final! Only one problem. Brett Smith sensei, 6 dan, multiple times National Champion, State Champion, National Team captain, National Team coach and all-round tough dude. Could Jordan beat him? Well he did a very good job. Brett didn't have an easy match. I even think Jordan could have scored a point, however the match went to Brett with a couple of disappointing decisions by the judges. But I don't think Jordan minded. He seemed to eat up the opportunity to mix it with one of Australia's finest in a real match situation where both kendoka were fighting for the match.

So after a lot of waiting around, I think Eli and Jordan were both pretty happy with the day.

Oh, and Eli won one of the four Kantosho (Fighting Spirit) Awards for his excellent performance.

Well done to us!