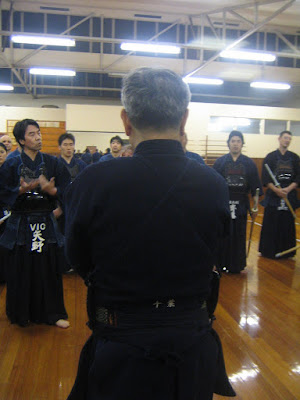 Just got home from the first evening's training of this year's shortened seminar and am writing down some of the major things he mentioned with us this evening.

Chiba sensei emphasises strong tenouchi and being able to strike cleanly and powerfully even from a short cutting action. He took us through basic suburi, emphasising not stopping the cut on impact, but letting the shinai cut and then rebound from the target. He also stressed that kihon or basic cutting action and what you do in jigeiko or shiai (competition) are not different. What you do when practicing basics is what you should do when competing.

Chiba sensei also emphasised natural standing posture in chudan no kamae which is difficult to describe in words without demonstrating.

Probably the main thing he showed us was the way you should imagine that the cut is going through the target, e.g. cutting men you should cut as if the sword is continuing through to the chin, cuting kote you should cut as if to pass through the wrist not stop on it. With do, the angle of cut should be a little flatter than 45 degrees but still not horizontal. He spoke about the difference between wielding the shinai and a real sword, how there are only differences because of the physical nature of the shinai.

As ever, Chiba sensei showed the power of his tenouchi, which he says is due to doing lots of suburi. It is also due to having a relaxed and flexible wrist action. People who complain that kendo is 'unrealistic' because kendoka are only taught to do "fast Men touches that can hardly be felt" that would be "ineffective with sword or staff", should see (and feel) Chiba sensei in action. His kendo is what we should aim for.