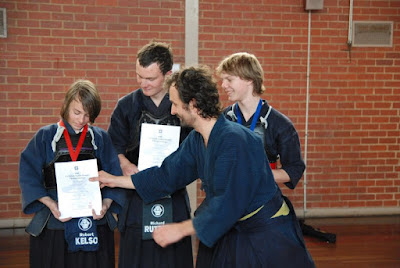 Another great Victorian Junior Kendo Championships today. The standard gets better every year.

This year we had two divisions, 14 & under and 16 & under. Unfortunately only three Victorian dojo were represented, Nanseikan (of course!), Fudoshin and Ballarat.

Firstly thanks to the shinpan who came along today: Gary Oliver, Khay-Lin Teoh sensei, Richard Ward, Jason Widdy and Andrew Lam. Thanks also to all the parents for bringing their boys (and they were all boys this year, more girl-kendoka needed!) as well as supporting their kendo throughout the year. Last but not least, thanks to Tony of UMKC, who took all the fantastic photos below. All pics are (c) Tony Shearer.

Straight off the 14 & under matches were high quality. Newcomer Yuichiro Sato of Fudoshin won his first match in his first ever taikai against Thomas Goh, also of Fudoshin. 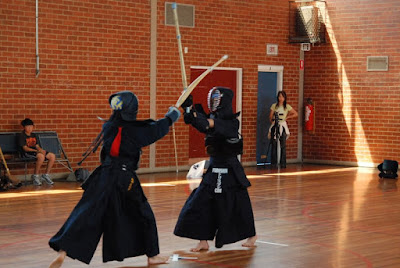 Sato (red) scoring men against Thomas Goh.
Poor Thomas didn't fare any better in his next match against our own Mr Weber. Geoffrey won with two very nice men-uchi. 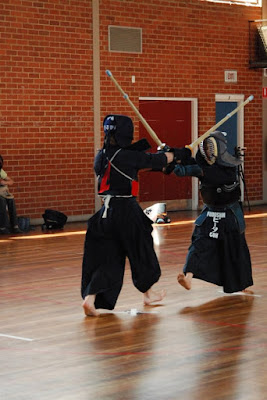 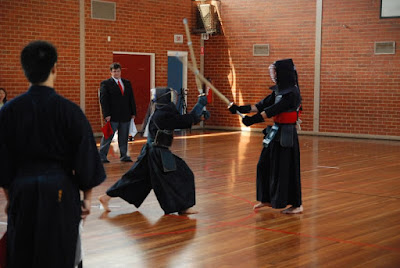 The next match was a scorcher with two NSKers against each other, Geoffrey and Robert. Geoffrey scored an early do and the match seemed destined to end 1-0. 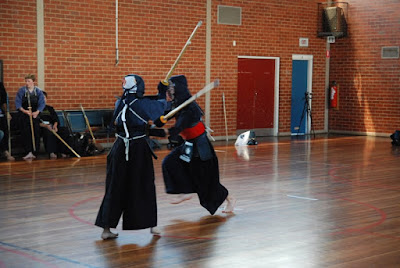 Geoffrey scores do-uchi on Robert.
Then, about the time evryone was thinking "Rob, you've got about 10 secs to pull something out," lo and behold Rob scores with a beautiful men. You can really see in this photo how much ground Rob can cover with his uchikomiashi! 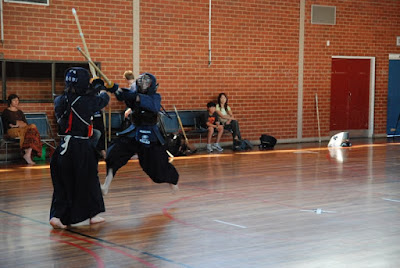 Rob scores men on Geoffrey.
Absolutely no doubt in the judges mind on that one. The match went into encho and Geoffrey replied with another men, taking the match. Next up was Rob against Yuichiro Sato. Rob was still firing in spite of his loss to Geoffrey, and he took the match, and the silver medal, from Yuichiro with another beautiful men-uchi. But it was Geoffrey who won the gold, with his two wins, both by two points. 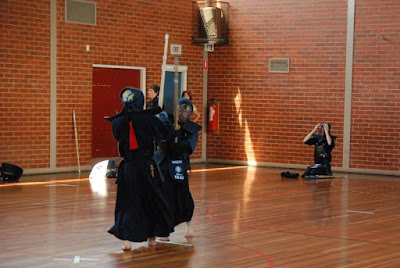 Rob scores on Yuichiro.
After a brief interlude... 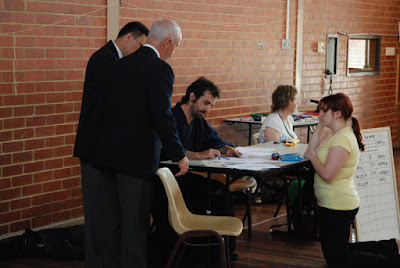 There are always problems with the draw...
...it was on with the 16 & unders. Geoffrey, as winner of the 14 & under, also took up a place in this more experienced field. Straight away, Thomas Goh's big brother Tristan showed he was not to be trifled with by accounting for Nanseikan's Richard with men and kote points. I think Richard was a bit taken by surprise. Jenny Kelso who was timekeeping for us said that Tristan's first men came only four seconds after hajime! If it's any consolation Richard, the pic below shows that it wasn't all one-way. The match was much closer than the score-line suggests. 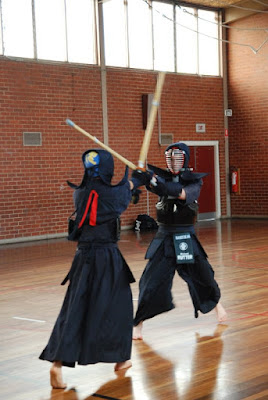 Not a scoring point, but very nice form from Richard nevertheless.
Next up was Tristan versus Andre Bricknell of Ballarat, and the tables were turned somewhat, with Andre dominating by scoring two emphatic men-uchi. Apart from being a lot taller than last year, Andre impressed with his straight form and excellent kime, that quality that leaves no doubt that you meant to do what you just did. 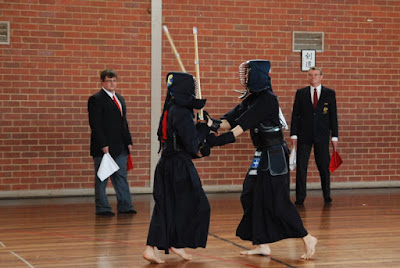 Tristan and Andre in tsubazeriai.
Andre's next opponent was Richard, and Richard was on the receiving end of Bricknell's kime, allowing Andre to score two men on him. Unfortunately for Richard, the technique below did not work as well for him as worked for Teramoto in the 2007 All-Japans... 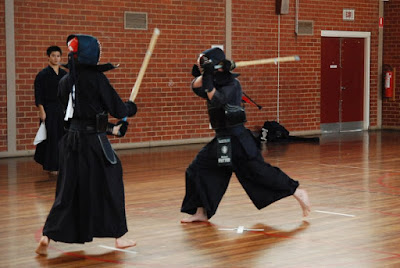 Hmm, I'll just trick him into thinking I'm going for his do...
Next pool first up was Geoffrey against Shaun Hearn of Ballarat: a draw with a men for Geoffrey and kote for Shaun. 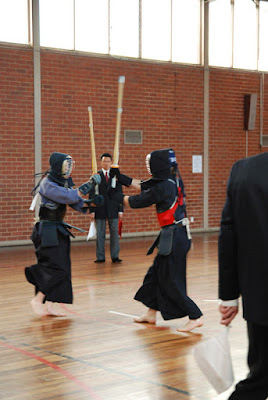 Ooww! Put me down! I'm a shinpan, you can't do this to a shinpan!

Next was Geoffrey against last year's winner Chris Brown of Ballarat. Chris made short work of Geoffrey with a 2 men-0 win. 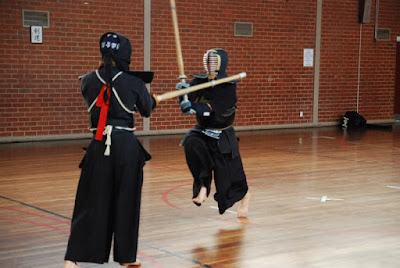 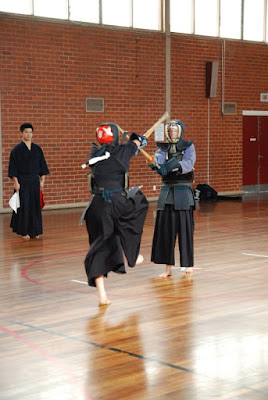 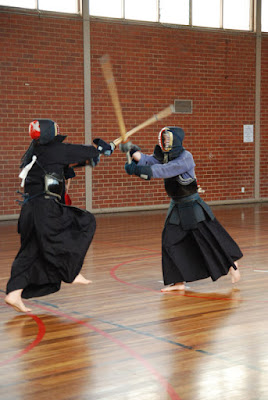 Chris obviously meant to defend his title and the final would prove to be a doozy. Andre came out firing, but Chris' experience meant that no-one was going to write him of early either. It seemed for a moment that the match might end up as a stalemate, as two evenly-matched kendoka who train together regularly might find it impossible to break through. 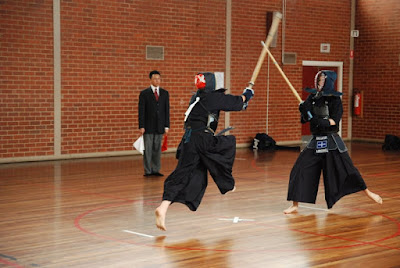 Chris Brown of Ballarat (white) against Andre Bricknell in the 16 & under final.
But suddenly Andre scored with a lovely men. Chris didn't muck around, answering very soon after with a men of his own. One all! Would it drag out? Who would break through? The match was intense, but clean and both showed exemplary kendo for their level. It didn't take long for Andre find the opening and score the winning men. 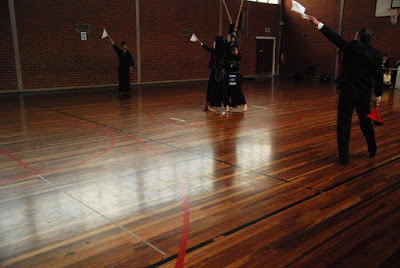 Andre defeats his dojo-mate Chris to take the title.
Well done to Geoffrey and Robert for their success. And ganbatte kudasai to Richard. You may not think so at the moment, but you have learned a lot from today's defeats. 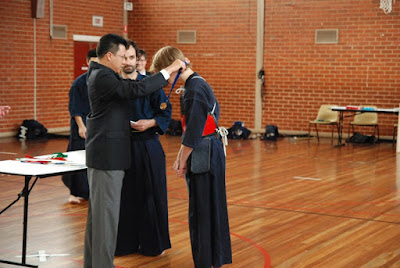 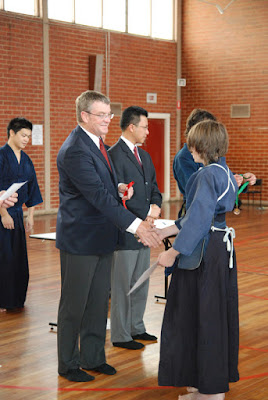 The final results were:

See you all next year!