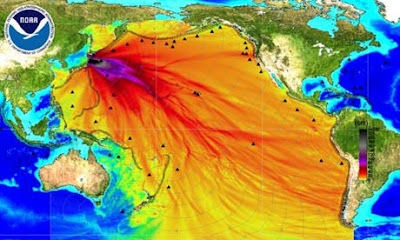 The path of the tsunami across the Pacific Ocean
The destruction caused by the earthquake and tsunami that hit the east coast of Japan has been unfolding over the last few days and I'm sure everyone has seen some of the terrible footage.
Now, problems with damage to one of the nuclear power plants in Fukushima have added another emergency, even before the clean-up can begin. As Satoru Orihashi (former member of Melbourne Budokai now living in Japan) said via email:
I am busy to recover our business and to deliver rescue goods.
It looks people have no time to be sad.
Fortunately all the Australian kendoka living in Japan, including Nagae sensei and his wife, are safe.
However there is still a hard time ahead for those in the affected areas. Many people are still missing, or they are homeless and have lost all their possessions. Still others are safe but don't know the fate of their family and friends.
The only positive thing that one can say about this is that the Japanese people have faced such disasters many times throughout their history (they invented the word tsunami, after all. BTW it means "harbour wave"). Earthquake, tsunami and volcanoes are to the Japanese what fire, flood and drought are to Australians. They practice evacuation drills regularly and have some of the best early warning systems and search-and-rescue teams in the world. So let's hope that the majority of people were able to get to higher ground before the tsunami hit.
If you wish to help, the Japanese Red Cross are accepting donations. Google has set up a page here where you can donate online.
http://www.google.com/crisisresponse/japanquake2011.html