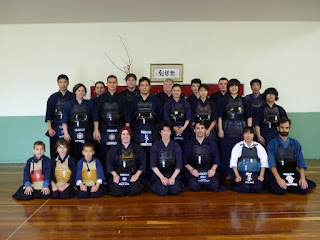 Last Saturday we had one of our biggest Kangeiko. This was thanks to the members of various VKR clubs that supported us by coming for a day of frozen feet, miso soup and lots of keiko.

The day's focus was metsuke, and we looked at a range of waza that tested our ability to maintain an even and impenetrable gaze. I was very happy when some of MUKEN's newest members thanked me afterwards for a training session where they got to do a lot of new things, including how to perform and receive tsuki. 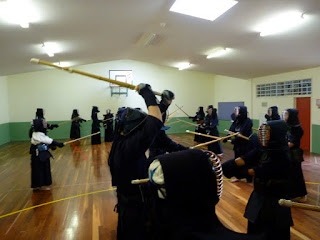 It was great to have a whole day to devote to a specific focus, and then to test that focus over a long period of time. Personally I found that I was good at keeping my metsuke general when it was kihon and uchikomi, but after a few jigeiko with difficult opponents I noticed my gaze wandering around looking at all different things and definitely giving away my intention.

Lunch was a great chance to chat with people I don't normally get to spend time with and catch up with their news. 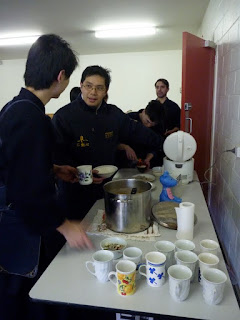 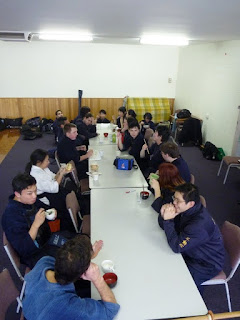 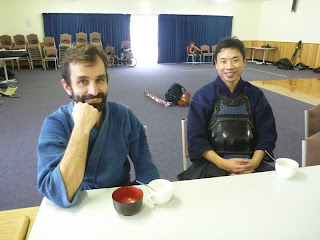 It's also a fantastic time for people to discuss things they've been thinking during training, or even thinking over the years! What a privilege to have the time to be able to go back into the dojo and test these ideas out. 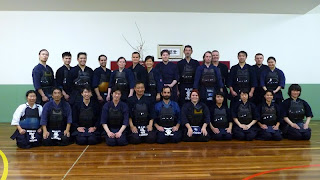 By the end we had a few extra faces, replacing the people who had to leave early. We finished as we usually do with a marathon session of jigeiko. Kind of the Kendo equivalent of an Emerson, Lake and Palmer double album. Ninety minutes of non-stop improvisation! 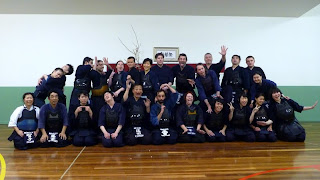 an hour and a half of keiko will do that...

This is becoming something of a Nanseikan specialty. MUKEN has their "Shinbashi pose", we have our silly pose. (If only I could animate it into a GIF).

The dinner afterwards was a great success too, with former NSKers I hadn't seen for a while: Kurt, Richard, Geoffrey, Paul, Luke and Robert. Special thanks to Macak sensei for coming along for the dinner. Also to Gary Oliver and Fujiwara sensei who sent messages of support. Caleb went one better and sent a video greeting from Taiwan.

There were other members who couldn't be there, some because they were travelling and some because we just couldn't get in touch. I was thinking of all those people and hoping they doing OK. It really has been a honour to be part of so many young people's lives, and the closest thing to immortality you can get in this life. And of course we remembered those we have lost:

My only regret from the dinner is that we were all so brain-dead from training no-one thought to take a group photo at dinner. :(  So I'll sign off with this picture that Caz took (thanks for all your help boss) of the plum blossoms that are the masters of debana: they always surprise me how early they bloom every year, but then I remember that it's the same time as last year. Perfect timing. 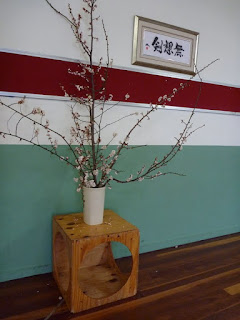 For more pics of the day, check out Shinoda sensei's blog. (scroll down past his shots of surfing at Torquay. Yes he did that in the morning before he came to Kangeiko!!)
club pics news seminars