Showing posts from September, 2015
Show All

I don't know these sensei's names but watching their kata is great mitorigeiko (training by watching). Study this well, as Musashi would say. b
Post a Comment
Read more

- September 18, 2015
In this post I suggest that one of the things you should do when not training is watch good Kendo on Youtube. To that end, here's a short and inspiring piece about Kato sensei from New York, the first 'foreigner' to pass the hachidan exam in Japan. I believe he is a photographer by trade, hence his talking about 'beauty'. Would love to have seen more of his Kendo, but beautifully shot and very poetic. Hope it inspires you to get out and do your daily suburi!  b
Post a Comment
Read more 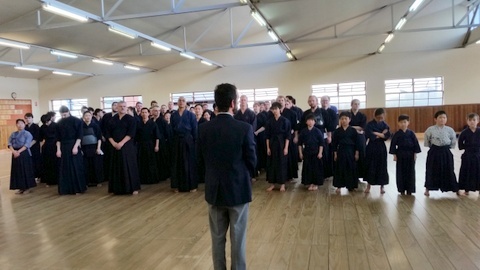 Congratulations to those who passed their kyu gradings last Sunday. There was a huge group, 97 people in all, making it quite a long afternoon. As usual the biggest group was 6th kyu and the smallest was the last group, 2nd kyu. Next term starts on 10 October. It will be the day we first use our new joseki , which I'm very excited about. Ever since the club first started I've wanted the joseki to be a piece by Ishihara sensei.  The second thing I'm very excited about is related to this, but won't be ready for the start of term. Yes, it's our very own NSK tenugui. The club has needed one of these too, for a long time, but cost and not having a suitable design got in the way. Now that we have a suitable design, the cost was surmountable. Couldn't order as many as I would have liked, but hopefully enough for now. It is being produced by Zen Sankei. Cain Lee was a great help at every step. They are highly recommended for
Post a Comment
Read more 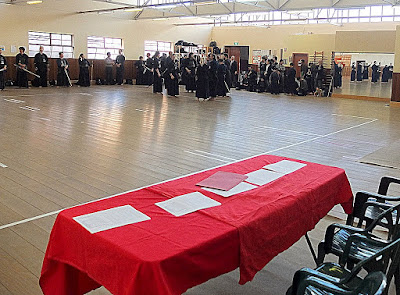 The September gradings are approaching. The first is 6 kyu to 2 kyu and is on Sunday 13th. The next is 1 kyu to 3 dan and it's Sunday 20th. Both are in the afternoon, registrations 12.30 for a 1pm start. Candidates for 6 and 5 kyu wear do and tare. All others wear full bogu. Be prepared to double-grade. Always stay to watch the gradings above you: that will be you next time. Make sure you are wearing everything correctly. If you're not sure, ask! Ganbatte kudasai!
Post a Comment
Read more
More posts