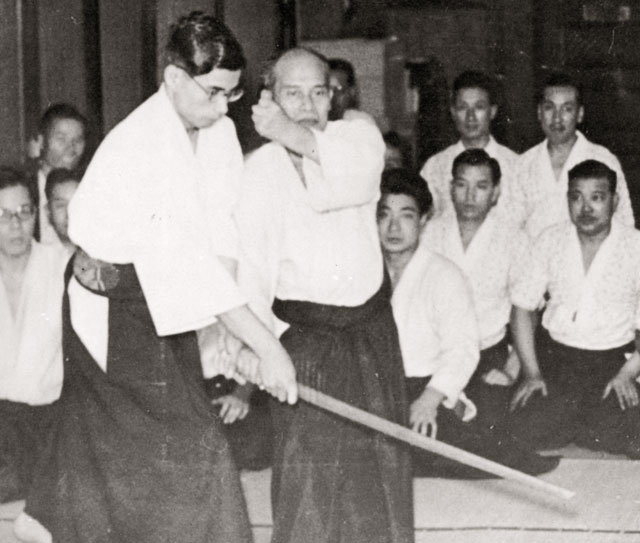 To say Nakakura Kiyoshi sensei was important to Kendo is like saying Don Bradman was important to cricket. Not only was he instrumental in shaping post-War Kendo (he was largely responsible for "the Concept of Kendo"), he was an influential teacher, a swordsman without peer in his generation and at one time the adopted son of the founder of Aikido, Ueshiba Morihei sensei (that's a young Nakakura with Ueshiba sensei above, c.1933).

As you will see from this excellent interview from 1987, Nakakura sensei was such a gifted martial artist that Ueshiba chose him above his own son to be his successor, hence he was adopted into the Ueshiba family and married Ueshiba sensei's daughter. For a while he became "Ueshiba Morihiro", but that didn't work out...

The reason he is so important to us is because he was my teacher's teacher. Nagae sensei became Nakakura sensei's student in around the late 1970s. As a result, anyone who was Nagae sensei's student had the advantages of being connected to probably one of the most important kenshi in Japan at the time. This credibility and esteem in the eyes of the Japanese flowed on to all of Australian Kendo. Most of us only realised how much this connection meant once Nagae sensei passed away and the flow of eminent sensei to our shores seemed to dry up for a time...

I was fortunate enough to do keiko with Nakakura sensei just once, when he visited Melbourne for the opening of the Kenshikan in 1990. It was an experience I'll never forget.

There is one other reason he is special in my eyes and that is because he hails from Kagoshima Prefecture! Again, the connection between him and Nagae sensei was important, for when I first lived in Kagoshima in 1993 it was Nagae sensei who contacted Arimitsu Masaaki sensei and got me an introduction to the Kagoshima Central Police Dojo. Arimitsu sensei is one of Nakakura's most famous students and was at the time the head of the Kagoshima Police Kendo Dept. Each time since then when I have gone back to visit I have been welcomed back to train with the Kagoshima police.

Please read the interview and you'll get a sense of the flavour of his Kendo, and of the kind of training of the times when he was a student.