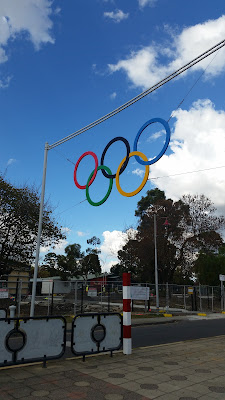 Next Saturday 11 May we will be relocating to Olympic Village Sports Centre (click to get directions from the dojo).

We won't have iai before-hand. Just meet at 8.30am to get changed for a 9am start.

We will be training in the basketball stadium inside the main building. Just go straight ahead past reception and you can't miss it.

The week after there will be no training due to the election. The following week training will be on again as usual back at the dojo.

As promised here is the video of Kanoya Taiiku Daigaku, or the National Institute of Fitness and Sports (NIFS) in English, known as Kataidai for short. There are two national sports science or PE universities in Japan, one in Tokyo that we know very well (Nittaidai) and one is southern Kyushu. Kanoya is a town about the same size as Ballarat and it is located on the other side of Sakurajima from Kagoshima. It's an odd place for a national university, but that hasn't stopped them from becoming one of the strongest universities for Kendo in Japan.

As I mentioned at training, the most interesting thing (I think) about their training regime is that they use a row of three motodachi for every drill they do, other than warm-ups and jigeiko. The video shows this very well, as well as the intensity of their training environment. Note their use of patterned and unpatterned sequences. Sometimes they will do 'yakusoku geiko' which means training to pre-arranged sequence, and sometimes it is decided by the motodachi. Yakusoku geiko is the easier format, so it usually comes earlier on in the practice. As you know, Kendo training always moves from simplest, most structured and biggest through to fastest, smallest and most spontaneous.

These Kendo Jidai International videos are great because they are professionally subtitled in English. The video showing their jigeiko is not availble as far as I can see, but I'm going to subscribe (it costs money) to their web magazine now and see if it unlocks a new level!
club info instructional videos