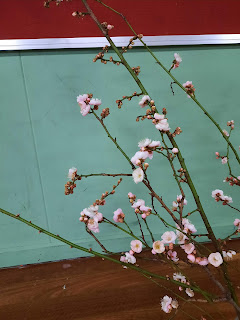 This weekend just past saw the successful staging of our first ever, two-day gasshuku. Held right after the winter solstice, it was an appropriately chilly Kangeiko! 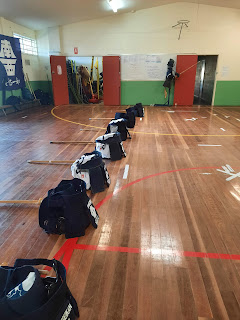 The program was ambitious but we succeeded in covering everything on the schedule. Judging by the smiles and feedback, everyone got something out of the weekend. It was especially good to host kenshi from other dojos, whether they were dojo leaders or beginners.
Nanseikan members did a wonderful job as hosts, being available not just to help but to take on various roles in the running of the weekend. Special shout-outs and thanks to Soon, Nick and Chie. Thanks also to William, Quinn and Chee for coming in on Friday to help set up. And thanks to everyone who helped with the most difficult part of the entire weekend - the clean-up afterwards!
There were some important absences and apologies. Some of our own members were away because of illness or family commitments. Matsumoto sensei sent her apologies for not being able to attend and congratulations on the milestone. Macak sensei also sent his good wishes and congratulations. Oliver sensei from Ballarat was another who dearly wished he could come but who had important family duties.
Richard Ward sensei sent a wonderful letter on behalf of his club Seishin Iaido, which I will copy here:

of Nanseikan Kendo Club, in this month of June 2022.

As an observer, along with many others, I have noticed the enthusiastic involvement of Nanseikan members

at many events over two decades, while also witnessing the steady skills development among them.

Kendo is a demanding but rewarding activity, with many goals to address, then meet. Mostly a satisfaction

of the achievement of a goal is a result, eventually! However persistence and dedication is a requirement

to achieve, then maintain the continuation of a successful dojo.

Establishing a dojo may be the most important of your achievements. After all, if no-one ever had established

a kendojo, we would not be able to practice and learn kendo!

Congratulations again, for your efforts to establish and continue to guide Nanseikan Kendo Club.
I hope the dojo continues for many more decades and your celebratory kangeiko is a great success.

You can hear Ward sensei's long experience as AKR President in the tone of his letter: always with an eye to the development of the Japanese sword arts as a whole, and the benefit of not just current but future students. 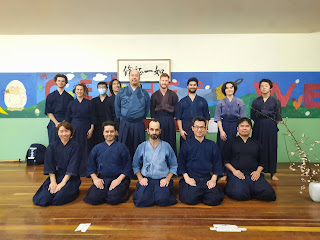 Other sensei who graced us with their presence were Barnett sensei from Vic Uni, Sugimoto and Chin senseis from MUKEN, Goletsos sensei from MBK and Dimovski sensei from Monash Uni. 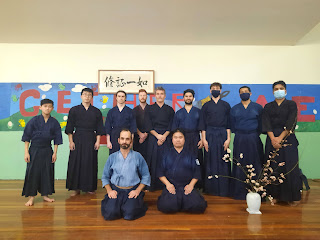 Sugimoto sensei gave a very kind speech at the end of day one, which told of how he started Kendo. The gist of it he reiterated in a post on his instagram account:

The 'ice-bath' challenge in the end only had three takers, but for all that it was actually a really invigorating way to wash off the day's training and prepare for the main event - dinner!
A huge pot of Japanese curry was cooked and a dozen chicken katsu fried up to satisfy the hungry kenshi, who had to wait a bit longer than anticipated because, well frankly none of us are professional caterers! That being said Soon and Chie (with the help of many others) cooked up one of the best katsu curries I have ever tasted. 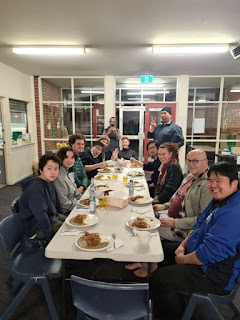 After dinner most went home and a handful of us stayed over, warmed by the fire from Nick's brazier until it was time to turn in. The next day it was curry for breakfast and lunch again, and Chie was right, it is better the next day! 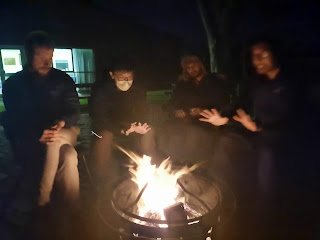 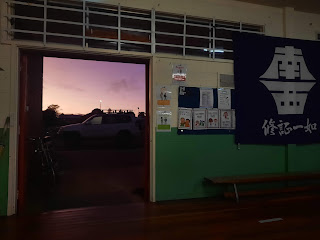 Finally, I'll let Kevin Chin sensei summarise some of the other technical aspects of the weekend, with his thoughts which he kindly wrote up and shared with me afterwards.

Congratulations again to you and the club for reaching your 20th anniversary! In fact it coincides with my 20th year as a kendoka! I vividly remember the first day during the beginner course. When you said the words, "The purpose of kendo is to discipline the human character through application of the principles of the katana," I knew I would be on this path for the long haul. Lo and behold, 20 years have passed. The weekend was a great opportunity to reflect and be grateful for the amazing people I've met through kendo and the positive impact kendo has had on my life.
On the first day, having an extended session on small waza cuts was very valuable, as it allowed us time to really finetune how we executed on the small cuts. You also introduced us to tsuriage dou which has applications in disrupting our opponent's mind. During normal training, there's always a certain set of exercises we need to get through which is why having a dedicated timeframe to work on more niche waza is always valuable. Being able to expand our repertoire of cuts and learn principles that carry on to the rest of our own kendo skills.
The second day was a real treat! It was the first time I had handled a live blade and used it on bamboo. It is humbling to see even after 20 years, there are still elements of kendo I've barely touched. The session which you facilitated was very meaningful, as it brought up the roots of kendo ie a practical skill set for a warrior to survive in battle. We also saw, and experienced how our mind, skill, and character were put to the test when faced with a single stalk of bamboo. No matter the result, we return to the practice and continue down the path.
It was also very gratifying being able to assist you in introducing shiai and shinpaning to kendoka. I remember how daunting it was to have my first shiai and also being a junior shinpan. You created a safe environment and gave everyone a taste on how shiai is run and just as importantly, the spirit in which it is meant to be run. To promote fair & competitive spirit among kendoka. Everyone was encouraged to ask questions which led to a deeper and broader understanding of shiai management.
Throughout the weekend, I think that the crowning glory of Nanseikan's achievement is the network of positive, dedicated and like minded individuals who worked together to ensure the smooth running of the kangeiko. More than that, it was the unity of spirit in which everyone walking on the path of the sword, working diligently to improve themselves which has truly inspired me. Thank you Ben Sensei for continuing down this path, lighting the way for others so that we too are able to thrive from our continuing practice of kendo. Honto ni, arigatou gozaimashita!
Kind regards from your student,
Kevin Chin
MUKEN 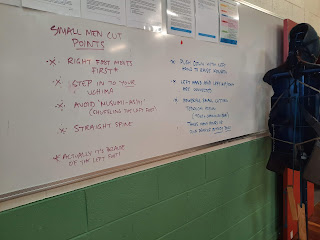