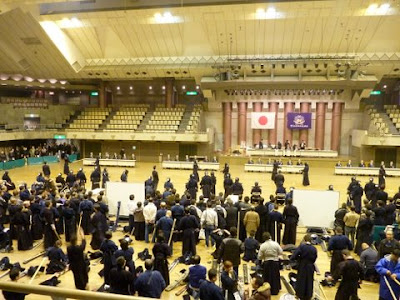 Information and questions regarding grading requirements, payments, etc go to the Head Instructor via

At Nanseikan we follow the grading rules set down by the Australian Kendo Renmei which are themselves in line with the rules devised by the International Kendo Federation (FIK).

Below are some guidelines for Nanseikan members only. These are for your information so that you can plan when you might be ready to grade.

Generally speaking anyone who wants to attempt a grade needs to a) ask their instructor and b) be a member of the VKR and AKR for a minimum of three months prior to their first grading.

Membership needs to be kept up-to-date. The VKR's constitution says that anyone who lets their membership lapse can have their grade reset to zero. This is to prevent people only updating their membership in order to grade (more directed towards those who have to wait years between high grades).

Readiness for grading is in the hands of the head instructor for each club, and they should not put people forward to grade who do not have an excellent chance of passing. From my point of view this means that you have regularly attended training in the six months prior to your grading date. Regularly means more than 80%.

So long as these pre-requisites are in place, there is no reason why you cannot grade at every opportunity, which is March and September each year.

For higher grades such as 2nd kyu, 1st kyu and above, 100% attendance at Nanseikan training is required in the lead-up period. At this level, each kenshi's progress is different, and so it may be that one may need extra time before attempting these high kyu grades.

As I said these are just guidelines. In the end it is down to me to recommend you for the next grading. I will make that judgement based on these guidelines, and any special circumstances that may apply.

***It is my expectation that all members, once they have finished the beginner's course, will train regularly enough to be able to grade twice a year, in March and September.*** 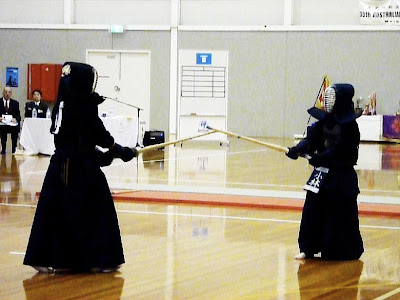 Although Kendo is not a sport, competition is an important part of training. We do not have competition on a weekly basis such as is the case with sports like football and netball. Our competition year is structured around competitions of different levels: local, state, national and international.

Participation
As a rule, anyone who has their first grading is eligible to enter competitions, provided there is an appropriate division.

At Nanseikan, information and questions regarding competition entry, requirements, payments, etc go to the Competition Manager via

Even if you do not yet have a grade or perhaps are too young to compete, still you can be a very valuable part of each competition by volunteering to help in one of the many admin roles such as scorer, timekeeper, tasuki (ribbon tying) and general set-up and pack-up.

Local level
In Melbourne there are many local level competitions. Any club may hold competitions for their own members. Some of the competitions that are held every year include:
These competitions focus on participation and building the Victorian Kendo community, rather than establishing winning reputations. The Mumeishi 3s is for 3 person teams from each club and at least one member must be a kyu grade. The Otsuka Memorial takes that a step further and mixes up teams so that each team is made up from members of different clubs, as well as different grades and a mix of male and female members.

National level
The biggest competition is the Australian Kendo Championships (AKC), held over two days every year at Easter. Location rotates around the member states each year. The divisions are the same as the VKC. The AKC usually are accompanied by a 2 day seminar and high level dan grading before the event. The All Japan Kendo Federation always sends two 8th dan sensei as observers. These sensei also run the seminar.

Entry to the AKC is via participation in squad training which usually starts 8–10 months before the event.  Team places are hotly contested, and selection is based on performance and attendance at State Squad training. On the other hand an individual place can usually be had by anyone who attends Squad training and has the ability to attend the competition. Performance at the AKC counts towards ranking which may allow a kenshi to be considered for national team selection

Another national competition worth mentioning is the Australian University Games (AUG). These are held every year in the September holidays in various locations and are a bigger event than the Olympics in terms of the total number of athletes. Eligibility is restricted to full-time university students, but this event is a great focus for the many university Kendo clubs around Australia and the standard is very high.

International level
The World Kendo Championships (WKC) are held every three years and rotate around the different International Kendo Federation (FIK) administrative zones: America, Asia and Europe (Africa and Oceania do not yet have sufficient kendo populations to support the hosting of a WKC). Australia has always fielded a team. There is no kyu grade competition or Kata competition at the WKC, just an individual and a team competition for both men and women.

Membership of the Australian team is based on performance in competition and also attendance at various training camps throughout the intervening years between WKCs. Australian team members are usually 3rd to 6th dan.

There are also some other international competitions that Australians can attend. The most regular is the Asian Zone Kendo Championships, hosted each year by the Hong Kong Kendo Association. This competition has three team events: a 3-man team of 3rd dan and below, a 3-woman team with no grade limits and a 5-man team with no grade limits. Again, if you have the means to attend and can form a team then chances are you will be able to compete.